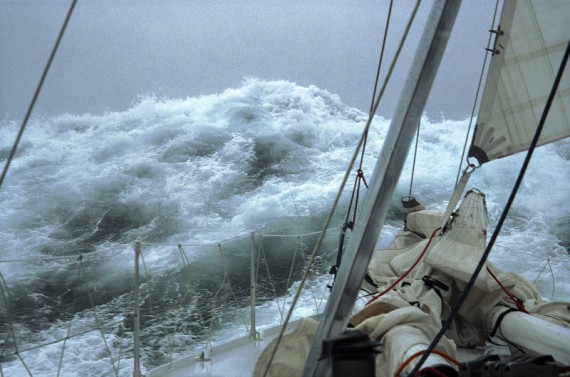 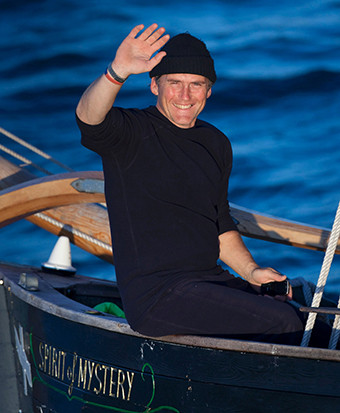 Pete Goss is the ultimate competitor. He is a sailor, adventurer and former Royal Marine, who has had numerous seafaring adventures. He has competed in seven transatlantic and two round-the-world races.

The most recognized of these was the 1996/7 Vendee Globe non-stop single-handed round the world yacht race in his Open 50 yacht 'Aqua Quorum'. It was this race which turned Pete into a national hero for the dramatic rescue of fellow competitor Raphael Dinelli in hurricane-force winds. Pete was awarded the MBE by HM The Queen and the Legion d'Honneur by the French President.

Pete’s other sailing exploits include training and leading a previously inexperienced crew of ten through what is generally held to be the toughest yacht race in the world – the British Steel Challenge. The route goes the ‘wrong way’ around the world, against the prevailing winds and currents. Pete proudly led the team aboard Hofbrau into third place.

In 1988 he defied convention by finishing second in the Carlsberg single-handed transatlantic race, sailing ‘Cornish Meadow’, a tiny catamaran just 26 feet in length. This was Pete’s first project, but proved that small, lightweight multi-hulls can be viable giant-killing race boats.

One of the largest projects for Pete was when he gathered together the team and sponsors that enabled the construction of the world-famous giant catamaran 'Team Philips' – this was a five year project that ended with the sad loss of the boat, but thankfully not the crew, in a freak mid-Atlantic storm in December 2000. Numerous successful businesses were spawned from that project and many people are still employed by them today.

Pete returned to offshore racing by competing in the 2006 two-handed Round Britain and Ireland Yacht Race with Paul Larsen aboard another small Trimaran, a Seacart 30. ‘Cornwall Playing for Success’ was the ninth boat to cross the finish line from an original fleet of 40. It was only a three-day set back to repair boat damage that prevented them from winning – at one stage they were a day ahead of the rest of the fleet. However, the goal of their entry was to raise money for Cornwall Playing for Success, of which Pete is a founding Trustee; in fact they raised enough to enable CPfS to build a new centre for youth training.

More recently, Pete constructed a 37’ wooden Mount’s Bay lugger, which he sailed with family members to Melbourne to recreate the voyage of the smallest migrant vessel ever to make it to Australia, and thereby shine a light on a the bravery of those brave Cornishmen who made that journey more than 150 years previously.  Despite being knocked down by a freak southern ocean wave that broke one crewman’s leg they still sailed on, reaching Australia together.

An entry in the 2010 Single-Handed Trans-Atlantic ‘Route du Rhum’ aboard a brand new Class 40 racing yacht and numerous trips to the North Pole are just a couple more examples of Pete’s seemingly endless capacity for adventure. Pete’s determination and limitless courage in the face of danger is unsurpassed and has moved people to tackle their own challenges in life. As Pete says: “Life hangs on a very thin thread and the cancer of time is complacency. If you are going to do something, do it now. Tomorrow is too late.”

It is from all these experiences that Pete draws when he gives inspirational and motivating talks around the globe. He also lectures in business schools and helps individuals and organisations reach their true potential. Indeed, he has just been made an Associate Fellow of Said Business School Oxford University.

Pete is the author of the best-selling book about his yachting adventures – ‘Close to the Wind’, where Pete shares his adventures, thoughts, hardships and philosophy during and throughout the ten years of preparation for the 1996 Vendee Globe.

He lives in Cornwall and is married to Tracey, with whom he has three children: Alex, Olivia and Eliot.

The picture was taken on Christmas Day deep in the Southern Ocean south of Australia. It was the start of a huge storm and one of the toughest challenges of my life. To fight back against those horrendous and ever worsening conditions for 160NM to rescue Raphael Dinelli, a fellow competitor in the Vendee Globe 1996, in which I was engaged with my boat Aqua Quorum. It took two days and nights, amazingly he was alive when I got there. The best Christmas present one could ask for…
NR : facing that huge storm in the Furious Fifties to go and save a fellow sailor can explain why these guys are so particular ! 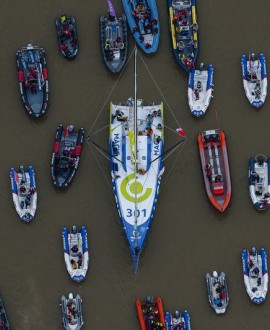 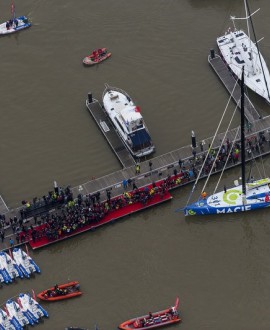 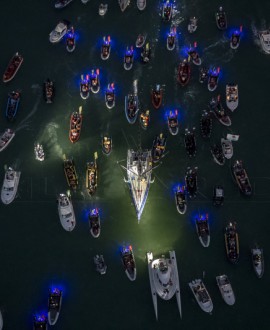 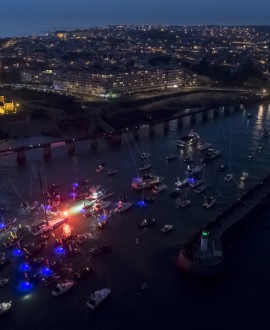 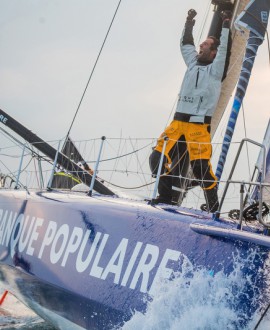 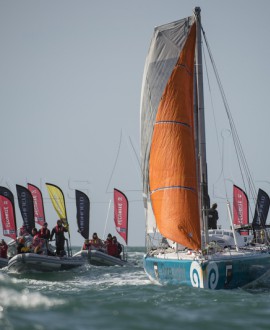 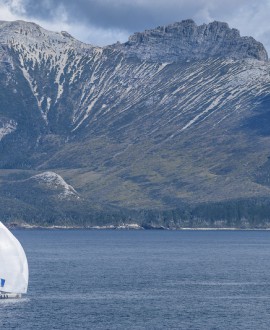 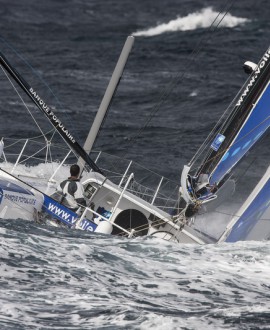 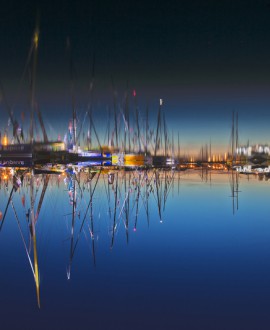 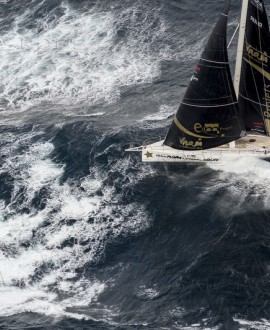 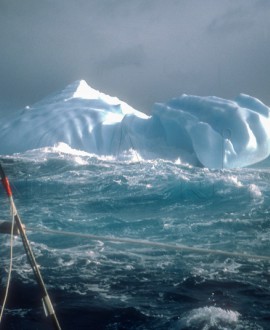 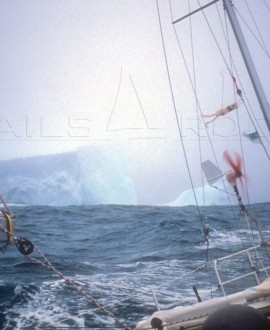 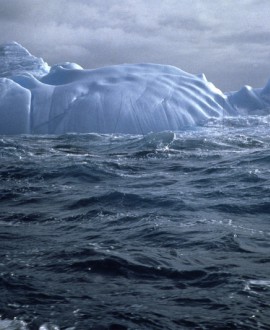 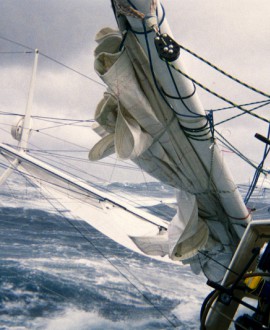 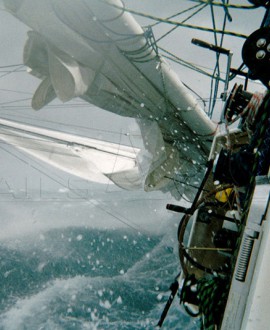 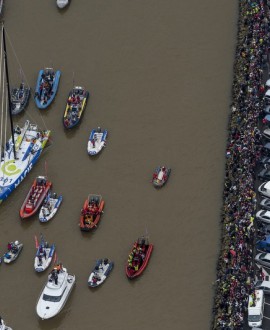 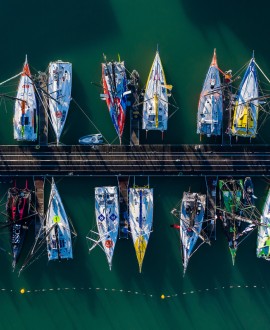 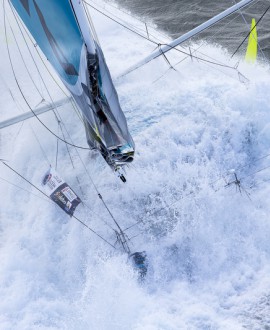